How did Non-dancers Dress?

Traditionally there was little difference between the clothing of dancers and non-dancers. What is more significant is the time, place and social status of a person. This is covered in the Traditional Clothing section.

What is the History Hip Scarves?

The beaded and coined hip scarves were invented by dancers in the States.

Edwina Nearing/ Qamar el Moulouk invented hip wraps with coins. Later Lucy Smith/ Scheherezade and Morocco created the ones with crocheted beaded fringes. Then in 1978 they talked Mahmoud abd el Ghaffar into making them and he created the bead and coin fusion style.

However Edison film evidence of the late 1890s [eg Fatima from Ibrahim Farrah’s "Rare Glimpses"] and photographs from Paris, show dancers in full dresses, or full skirts with blouses, with a vest and sometimes a fringe at the hips or waist. Karin van Nieuwerk in "A Trade Like Any Other" describes a costume of wide skirt or trousers, undershirt, and waistcoat. Even the Ghawazee who were considered immoral were so deemed because they danced *unveiled* in the streets. None bared arms or bellies.

The earliest documentation of dancers wearing bedleh-like costumes is in the West. La Belle Otero in the Folies Bergère (1901). In 1906 Ruth St. Denis performed a variety dance with some Indian movements in a "nautch"-like costume. Strauss' opera Salome came out in 1905 and the typical costume for the title role was essentially bedleh, including at least one (and typically, seven) veils. Maude Adams (1907-8) did a Salome dance in variety theater in a particularly bejeweled and revealing bedlah-style costume.

But with Badeia Masabny's nightclub there was a major shift. Badeia targeted the rich upper classes - who were very Western identified. She wanted her dancers to be something special, so she dressed them to the Orientalist's fantasy and gave them European ballet trained choreographers. The costumes at the Casino Opera drew more from the Ballet Russe than Pharaonic Egypt.

Among the dancers in Mohamed Ali Street, bedleh was not generally accepted until the late 1940s.

No! Apart from the unpleasant effect of hot metal against the skin consider how recent the bra is.

When was the Bra Invented?

The first patent for a bra-like garment was issued in 1893 for a 'Bust Supporter' by Marie Tucek. But it was Mary Phelps "Backless Brassiere" (patented in 1914) that formed the basis of the first mass produced bra in the mid 1920s.

How does the choli fit into costuming?

The introduction of the choli from India as costuming is credited to Masha Archer (who studied under Jamila Salimpour previously) prior to 1980. That is, it is a part of ATS rather than traditional MED wear.

What Makes up the Tunisian Costume?

Depends where you are talking about. On the whole women wearing turbans is more Central Asian than Middle Eastern. Kurds, Karakalpaks, Ottoman Turks, Jews, Azerbaijanis, and the Georgian women of Adjaria have a turban. But each turban has its own characteristics. The specific style of a turban can signify the regional, ethnic, and social identity of the wearer.

What is the costume for Milaya Lef? 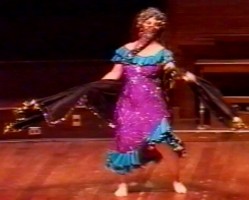 The milaya lef (winding sheet) is large black cotton wrap (over 3m long) that used to be worn by bint il-beled in Alexandria or old Cairo over normal clothes often with the mandil and bur'a.

Stage milayas tend to have sequins around the edge and across the center. (However, I have seen very good milaya lef performances with plain fabric milayas - but not veils they need some weight and stretch).

There are a number of wrapping styles. Normally you gather the milaya vertically first. Commonly for dance one shoulder is free and the head uncovered. However you can include a hood in the wrap.

Any suitable dress may be worn under the milaya. Reda's original dress was a plain dress, mid calf with a pattern of roses printed on the fabric. These days the dress is often over the top with ruffles and asymmetry.

In addition there is the mandil (pompom headscarf), bur'a (an open weave face veil) and shoes.